In my search for a better "Me" I started writing as a form of therapy, so to say. I wrote in a book type of form, but have no plans of having it published... it's just a way to get it out of my system and don't get me wrong when reading it... I loved my father and I know he loved me... in his own way. And dad is always dad no matter what he does, how he behaves or what he sais... 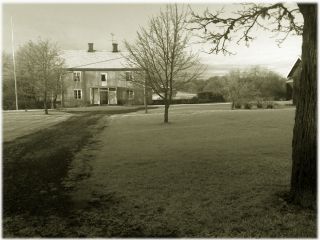 The big white house stood in the middle of the great field just as I remebered. The lake looked like a mirror behind it and I could clearly remember all the times we used to go fishing in our little boat. This was the house I grew up in. The pool next to it were where I learnt to swim all those hot summer days. That apple tree on the other side was where I bravely climbed as high as I possibly could, and then sat there, letting the leaves shade me from the sun. Outside the big barn is the place I stood that time my brother decided to shoot me in the leg with a bebe-gun, and then having me promise not to tell our mother why there was a small hole on my pants. Oh, those childhood memories. There is nothing to replace them. Those times when everything seemed to be perfect. When you are a kid there is nothing to disturb your happy moments. Having loving parents. Brothers and sisters you get along with just like all kids do, with loving fights and teasing eachother.

I grew up in, what would probably been considered, a priveleged home. And it was... in many ways, but when looking back on it, in hindsite, not everything was what it seemed.  We had a nice house, true, well... two actually. My father had his own business and it was prosperous. Many employees. And he worked with the thing he seemed to love the most, photography. My mother helped in the company, and me and my brothers were taken care of by our nanna and granpa, when our parents worked. We never lacked anything, as it seemed, and I guess you could say I was rather spoiled. I admit to it. My friends used to say I was, but I didnt want to admit to it then, but now, when sort of grown up I can admit to it. YES! I was a spoilt little brat. But I never asked for it, and I never lay down on the floor kicking and screaming to get what I wanted.

Then... my parents divorced. My eldest brother moved to my grandparents and me and my brother moved with my mother to an apartment. My father eventually sold the company he had and started a new one. He sold on of the houses, and later on the last of my childhood homes, to move to a smaller house. Understandably as the house I grew up in had like 9 bedrooms, library, huge living room, study and an enormous garden. And he was now living alone, with us kids visiting on weekends and holidays. So, I understand his decision to move to a smaller house, more suitable for him.

My brother often spent his weekends with our dad, but I never stayed the night. I tried. God, did I try, but it always ended up with tears, my father calling a taxi to take me back to my mother and having her pay for it. I know he was sad about me not wanting to stay with him but I just couldnt. I never knew why, but I never felt safe there. The reason for calling the taxi was because he often took a glass of wine with dinner, didnt want to leave my brother alone, and my mother couldnt afford her own car.

My mother, on the other hand, stood for everything safe and stable in my life for a great number of years. Now a single mother, trying her best to make ends meet. Working nightshift at the hospital so she could be home with us during the day. I know she struggled and my father wasnt much help to her. But she always managed to put food on the table, clothes on our backs and a roof over our heads. Sure we had our ups and downs, but dont every parent-child-relationship have that?! I dont think I was that difficult though. I never really had that teenage revolt and did pretty well in school.

Now when I sat there in my car, all grown up, in front of my once so cherished childhood home I started to think. Had everything been so perfect as I thought when young? Probably not, as things rarely are. Looking at the house I noticed that the weather had changed. My memories were sunny and warm. The grass was green. The water in the pool looked inviting. And the lake reflected the sun, as so many times before. The reality was slightly different. The rain was pouring down. The grass hadnt been green for at least three months as it was in the middle of winter, but the snow had not yet fallen. If there was any water left in the pool, there was nothing inviting with it and the lake was covered with a thin layer of ice as a reminder of that it actually was January. But the house still looked just as I remembered it. Now used as a summer home for an excentric american lady, who spent maybe four weeks during the summer here. The rest of the year the house was empty. Alone. Cold. Loveless. Not at all as it should be. There should be a fire in the fireplace in the library, a nice scent of freshly baked bread from the kitchen, music playing. But now it was totally dead. It was sad.

I sat there in the car for a few minutes more, trying to decide if I should drive up to the house or not. Decided on, not, and started to look around to see if any of the neighbouring houses had the same people living in them as when I grew up. But who was I kidding. I wouldnt be able to recognize them after 25 odd years even if I wanted too. One thing I did notice was the tiny tin box dangeling from a, now, huge tree outside the neighbours house. I remembered when we tied it up there. Me, my brother, and the two girls from next door. We put memories from that summer in the box. Cant remember exactly what is was, but I guess it was a four leafed clover, a flower, a wood pipe we got from the girls older brother, probably a small handwritten note we all signed. Then we tied  a nylon string around it and one of the girls climbed the tree and put it up there. And its still there, but I couldnt bring myself to take it down. In a strange way I think we all should be present if it is to be taken down. And if time hasnt taken care of the string or tin box, Im not going to either.